As almost every year we visited the jazz festival in Vitoria-Gasteiz to listen to great music, eat well (at the amazing Sagartoki, which has been voted three years now as having the best Tortilla de Patatas in Spain … and the Huevos Fritos alone are worth a trip up there ….) and generally have a good time in the company of the great people who are running the festival.

Our first day opened with a performance of pianist Chano Dominguez and guitarist Niño Josele, whose first duo concert this was – a world premiere of the album Chano & Josele, which will be released in September. A deep musical understanding of the two artists made this concert special from the first minute, exchanging improvisations, playing with the tunes and seemingly enjoying this show. Some of the songs just worked perfect, like John Lewis’ Django, one of the most amazing tracks on the record, here performed with many new ideas and twists and full of feeling for the essence of the song, others will need to be played more often to reach what the artists already promised in that first performance. A deserved standing ovation from an enthusiastic audience that Asked for 2 encores ended that initial concert, but more will follow all over Europe in the second part of this year and early 2015.

This show was followed by Darcy James Argue’s Secret Society, but as I had seen and heard them already in Rotterdam the weekend before, we opted for an earlier night and just had a vino before retiring to our room.

Noa opened the next evening’s shows – with a read message about the madness of the war in Israel/Palestine and then performed old and new material in a captivating mix – as usual perfectly support by her husband and guitarist Gil Dor and this time bass and percussion. She is simply a great performer and even the ‘old’ song still sound fresh, as today’s version of I don’t know impressively showed.

Then Miguel Poveda – one of Spain’s most impressive voices – Coplas and Flamenco and …. He is a very emotional and expressive singer, who performed from a really small more flamenco based group to up to an octet with horns and in every format he was truly comfortable and musically at home. The audience definitely loved it and showed their appreciation with shouts of Olé and standing ovations after some of the songs. 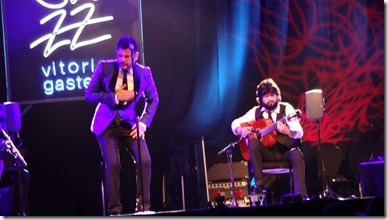 He ended his show with asking Noa to join him on stage and they performed a few songs together – a great finale to a glorious night of voices and music.