Chick Corea’s solo effort Portraits was recorded on tour over the last few years and shows his incredible talent as an improviser and pianist of both classical and jazz. The first CD of the double album pays respect to Bill Evans, Stevie Wonder, Thelonius Monk , Bud Powell and Paco de Lucia. Chick talks about these influences in his musical life before performing songs of or for them, by going into the essence of the compositions and making them all his own. CD 2 starts with Scriabin, Bartok and then goes into Corea’s own Children Songs and Portraits – simply beautiful.

Charlie Haden / Jim Hall The newly re-activated Impulse! Label pays tribute to two masters of their instruments, two great story tellers and musicians. Recorded in Montreal 1990, this is a true gem and shows again why both artists will be missed in the music world. Communication between two people is the most direct form of communicating – Haden and Hall show us how to listen, react, give the conversation new directions and then pick up the theme of the discussion again.

Sílvia Pérez Cruz & Raül Fernandez Miró This is an album full of beauty and constant surprises and still it sounds coherent and is throughout captivating. On Granada the most amazing singer in Spain at the time and her guitarist are covering music from Enrique Morente to Robert Schumann and Edith Piaf, she singing in English, French, German besides the obvious Spanish and Catalan and it all seems to flow into one great musical expression – A rare thing to happen. A true star.

Kenny Barron / Dave Holland give us The Art Of Conversation … and that is exactly what it is. It is no exaggeration to state that Dave Holland is now probably the leading jazz bass player in the world and the immaculate Kenny Barron always has been a musician’s musician – together they ‘chat’ on the highest musical level and communicate over their tunes as old friends can do – with an understanding that is beyond words, can leave things out without losing meaning, always pushing a bit further to get deeper into the music. Sublime.

Antonio Serrano performs on Mahalo with pianist Alberto Sanz and it proves a worthy partnership, paying tributes to Antonio’s heroes Larry Adler, Toots and Paco de Lucia, with whom he was touring the last few years. Serrano has the most beautiful sound on his instrument, full and warm and he performs and improvises on the highest level. The album features songs by Horace Silver, Gershwin, Ivan Lins and of course Toots and Paco de Lucia, but Serrano makes all these his own and sensibly supported by pianist Sanz, this turns into one gorgeous record to listen to. 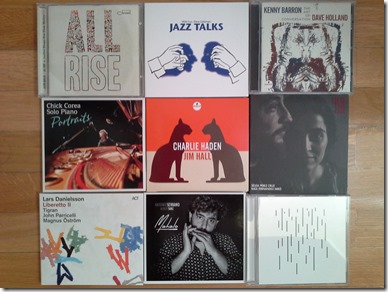 GoGo Penguin v20, the new album by this British piano trio was just recently nominated for the Mercury Award, one of the UK’s most prestigious music awards. But then, these guys are modern and cool and attract a young and hip audience. And now as the album is released as well in the rest of Europe, they are out to conquer the old continent – and will have a good chance. They are touring in the fall in most EU countries – go and check them out!

Lars Danielsson Liberetto II is the follow up of the critically acclaimed Liberetto album – and this one will excite critics as well as listeners in the same way. Danielsson again proves what an excellent composer he is and how he can get the best for his music out of his sidemen – in this case the amazing Tigran on piano, Magnus Öström on drums and John Paricelli on guitar with guest performances by Matthias Eick on trumpet and singer Cæcilie Norby, who as well produced the album. Music from the soul, emotional and touching. Exceptional.

Jason Moran had Don Was and Meshell Ndegeocello produce his latest opus All Rise, A Joyful Elegy For Fats Waller and it did the album well – this modern take on Waller’s music is full of fun and respect – just check The Joint Is Jumping and you’ll understand. The music keeps the energy of the originals, but takes them into our times and one still can dance to them – or just listening (and moving your legs anyway).

Vein – Jazz Talks is the second Vein album featuring sax legend Dave Liebman and it shows an even closer understanding of the Swiss piano trio with the saxophonist. From standards like All The Things You Are to compositions by all 4 musicians to April in Paris, this music is fresh and interesting, leaving space for all to improvise and move within the music. Liebman doesn’t take the spotlight as the main soloist – this is more of a collective effort with the guys playing with each other and communicating in the group and let each of them express himself within the framework of the song. Liebman’s composition Negative Space is a good example for that.

And then I do listen as well to Christian Muthspiel & Steve Swallows duo album Simple Songs; the new and more jazzy Jamie Cullum Interlude; Free Souls by the amazing Nicola Conte; the best of Madeleine Peyroux; El Niňo by the incredible Flamenco singer Rocío Márquez; Gilbertos Samba by Gilberto Gil and Nicolo Faraci’s It Came To Broadcast The Yucatan.

About all the great music on OKeh I’ll write next time.