Lucky to have had the chance to hear Branford Marsalis twice in the last few weeks – first with his quartet as part of the Barcelona Jazz Festival and then again solo in the Kulturkirche Altona in Hamburg, performing the repertoire from his amazing new album In My Solitude, recorded during another solo concert at Grace Cathedral in San Francisco. When his quartet is in a good mood, there are few groups as tight and communicative musically as they are. Branford presented new drummer Evan Sherman, who with his 21 years got plenty to learn, but overall did a great job and fitted well into the musical adventures the rest of the group got themselves into. Joey Calderazzo, as ever, full of ideas and with powerful and impressing solo work and Eric Revis was keeping the beat and telling stories. Branford let them go, listening, reacting and played absolutely amazing – always keeping the melody in mind and at the centre of his improvisations. The audience simply loved it, whether it was an original, a known standard or some New Orleans groove – all used as a base for improvisation, individually or as a unit. When it comes to play, Evan Sherman is probably in the best group to learn how to do so – communication is the key, understanding and listening the next step and then it is all about letting go and enjoy the moment together. If that works for the group, it surely will work for the audience … as it did in Barcelona.

The solo concert in the beautiful Kulturkirche Altona was a completely different beast: this was only the second time Branford actually did a solo concert – the first being the new album and then Hamburg. More or less he played the same repertoire in Hamburg than what you can find on the album, notable exceptions here that he played Body & Soul, On the sunny side of the street and Bach’s Allemande, from the Cello Suites No 1, which was for me one of the highlights of the evening. Twice more or less 45 minutes plus an encore! A tough call on any soloist – Branford used the space and sound of the church to its best, changed between soprano and tenor and kept the audience mesmerized. It is difficult to explain the beauty of the sound in this place, the melodic inventiveness of Branford’s soli and the beauty of the selected repertoire, as not every song works in that setting. The two concerts simply confirmed that Branford Marsalis is not only one of the leading sax players of our time, but he is as well still open to take risks, to move into areas unknown and be able to make a valid musical statement there.

Dee Dee Bridgewater came to Madrid on her latest European tour, in which she used her protégées band as her backing group – Theo Croker’s DVRK FUNK, featuring the amazing alto sax player Irwin Hall (here without his Roland Kirk impression, which he did so well when in Melody Gardot’s band), Eric Wheeler on bass, Michael King on piano and Kassa Overall on drums. Theo and the guys started the proceedings with a few tracks from his latest album Afrophysicist, before giving Dee Dee the powerful support that still amazingly energetic singer needs. Theo arranged most of the music for her and the group and gave standards like Love For Sale a different edge, a more modern and darker vibe. Same is true for a gorgeous arrangement of Abbey Lincoln’s Music Is The Magic, which moves from hauntingly beauty to a sinister dark place and back ….. true magic! Dee Dee still is one of the best performers out there, her voice immaculate and her control second to none. It was fantastic to see her energised by the young players around her and the great arrangements they came up for her music.

Finally catched yesterday Pablo Martin Caminero’s quintet performing the music of the new album OFNI, which I have mentioned already in an earlier blog. I just love his compositions, the melodies and grooves they create in a true flamenco/jazz style. Pianist Moises Sanchez is a great improviser, his soli full of ideas and references, but in this group as well he is a great part of the overall sound, filling spaces with a delicate touch and supporting the other members when their time for a solo has come. Sax player Ariel Bringuez and trombone player Toni Belenguer are a great horn section and individual voices when it comes to take the lead and drummer Michael Olivera pushes them on with a steady beat, helped keeping the pulse by a smiling Pablo, who enjoys hearing his fantastic composition played by this group. Catarsis, one of the pieces on OFNI, has a beautiful little melody, builds up over the 10 or so minutes the song was played and ends with a powerful recall of the melody … a pleasure to listen to. As I probably said before: Pablo is one to watch out for, as a player, as a composer and as a band leader! 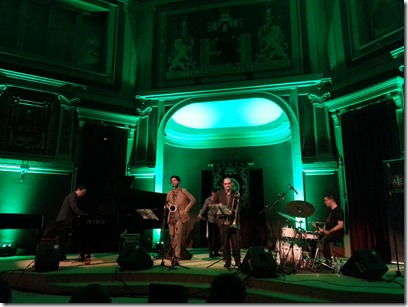