Just got back from New York where I attended the Jazz Connect Conference, which for the first time was not part of APAP, but running independently for two days of panels, discussions and speeches at Saint Peter’s Church. Interesting aspects of all parts of the jazz world being discussed and presented by some of the key artists of the genre and people in the business. I did conduct the panel on Canada and together with my panellists singer Kellylee Evans; Jean-Pierre Leduc (Lunched Management & Booking); Ross Porter (JAZZFM91) and Jim West (Justin Time Records/Wild West Artist Management) we informed the audience of the situation in Canada’s jazz market. Very interesting. Just walking around the venue of the event after the panel was quite amazing with so many familiar faces and great artists being around, talking, doing interviews and generally having a good exchange on topics of jazz.

Great that the annual Winter Jazz Festival is always at the same time, so there is a lot to see and hear whenever I come for the conference – because of a bunch of meetings this year I had to be selective and went out on the 10th to see Taylor Eigsti’s Free Agency featuring Gretchen Parlato, Becca Stevens and Alan Hampton on vocals, Eric Harland on drums, Harish Ragavan on bass and James Francies on more keyboards. A very sophisticated vocal project with beautiful written harmonies for the singers. Sometimes reminding me of Carla Bley’s Escalator .. and at other times of Grace, the John Donne project by Ketil Bjornstad, but overall it is very much it’s own music. Once they have performed that project a few more times it is going to be even more amazing. Taylor is not only a pianist/keyboarder of incredible talent, but a songwriter and arranger worth checking out.

After that I walked in freezing temperatures from the Subculture to 55Bar to see Nir Felder and his band performing in a full house. Nir is a truly gifted young guitar player with a good ear for a tune and his compositions are part rock, pop and jazz and are appealing and catchy, but musically full of surprises and deepness. Could have listened all night, instead of two intensive sets only …. 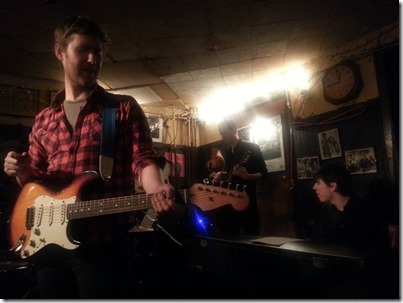 The next day, after having a great lunch with Theo Croker, James Brandon Lewis and Somi I went in the evening to see Sachal (Vasandani) perform his new music at the Rockwood Music Hall. Unfortunately the singer who was on stage before didn’t know when to stop, so everyone had to wait outside in the cold …. But once inside and immediately after he started, that was forgotten …. Sachal sang the new tunes perfectly, with fitting movements (on a small stage) and a very good band behind him, featuring Taylor Eigsti on one of the keyboards. Songs like No More Tears and Cover The Water came across extremely well and the rest of the new songs simply caught everyone’s ear – the band will need to play the material a bit more often to get the best out of the songs, but that is normal. And hopefully in the future he will have his own sound engineer, as too much bass reduced the listening pleasure a bit. But the evening was all about him and the new songs and he fully delivered in terms of vocal performance and song writing. Slow Motion Miracles will surprise a lot of people …. in a positive way!

As Sachal started late and we had a drink together after the show, I missed Theo Croker’s DVRK FUNK, which I am really sorry about, as I had seen them with Dee Dee Bridgewater in Madrid and was looking forward to hear them playing some new songs live. Maybe soon, as they will tour Europe in spring and summer.