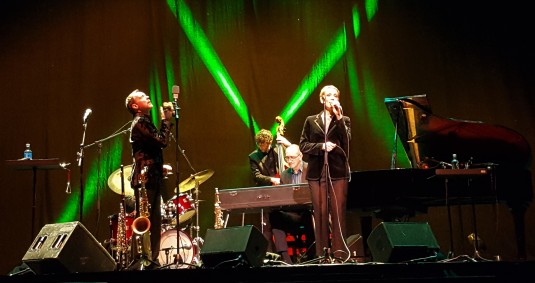 What is there more to enjoy than a great concert … and I got two last week!!! First Stacey Kent, who brought her working group to Madrid for a show at the Teatro Nuevo Apolo, performing in the small group setting material from her new orchestral album ‘I know I dream’. A tight band, led by husband and composer Jim Tomlinson, who has worked with writer and lyricist Kazuo Ishiguro on various songs, including ‘Bullet Train’, which was performed on the night. Kent seems to move effortless through the songs and sang immaculate – deserving the standing ovation and long queues to sign her records after the show. Wonderful!

The day after it was a Balkan groove party at the Teatro Circo Price : Goran Bregovic and his ensemble got everyone up and dancing after a few minutes and kept the groove going for almost 2 hours! Mostly performing songs from his latest album ‘Three letters from Sarajevo’ (which features special guests Bebe and Rachid Taha), but as well going into his past hits – like Ederlezi, Bella Ciao and Kalasnjikov – much to the audience’s delight. Great music – great fun!!!!

Michel Camilo / Live in London    The first solo live recording by piano great Camilo and a perfect combination of the power play he is known for and his more lyrical side, both showcased impressively on this concert recording. A master at work.

Wolfgang Haffner / King of Spain    Drummer Haffner is in very good company on this tribute to the country he chose to live in – Jan Lundgren on piano, Sebastian Studnitzky on trumpet, Daniel Stelter on guitar, Christopher Dell on vibraphone and Lars Danielsson on bass help to create a beautiful and laid-back atmosphere throughout the album. To be enjoyed with a glass of Rioja wine to make this a perfect experience!

Paolo Vinaccia / Dommedag ifølge Paulus    This CD/DVD set is something truly special: Vinaccia came up with the concept and co-wrote all the music for this touching and emotional concert for drums (Vinaccia), guitar (the amazing Eivind Aarset) and choir (The Norwegian Soloist’s Choir under Grete Pedersen). Be moved by the strength of the music, its emotional content and expression of the love for life. Essential listening!!