Before the 2018 Madrid International Jazz Festival took off on November 6th, I got to see two very impressive and groovy shows in town – on the 4th at Bogui Jazz the James Carter Organ Trio and on the 5th the wonderful Combo 66 by John Scofield. Carter’s organ trio, featuring Gerald Gibbs on Hammond B3 and Alex White on drums, is a powerhouse of grooves and heavy beats, but wonderful as well on delicate ballads. James Carter is one of the most accomplished saxophonists of his generation and his horn gives him an outlet to scream, howl, tell you a story or whisper something into your ears. His range of expression on his instrument seems endless, from powerful wails to simple and beautiful melodic excursions, always given context by the sounds of the organ. Gibbs, a master of his instrument as well, works with Carter for many years and one can hear that by the way they react to each other. Always great to see James Carter and move with the groove of his exceptional trio.

John Scofield performed mostly the music of his new album, Combo 66, titled the same as his new band, featuring Gerald Clayton on keyboards, Vicente Archer on bass and trusted companion of many years, Bill Stewart on drums. This is more of a jazz band than some of the other Scofield groups, but they still groove and rock when asked for! Clayton is a very fine pianist and organ player and with this group he shows that he really is up for the groove as well as the finer things in music … Scofield is an innovative improviser, composer and performer and this gig was no exception … a feast for guitar fans. John will always be the main focus of his shows but without taking the shine off his band, which sounded very tight and together and really acted as a group and less than just the support for the main man. And they got their audience with a passionate and powerful performance of the new compositions by John Scofield. If you don’t get a chance to see this amazing band live .. go and get the album – Combo 66!! 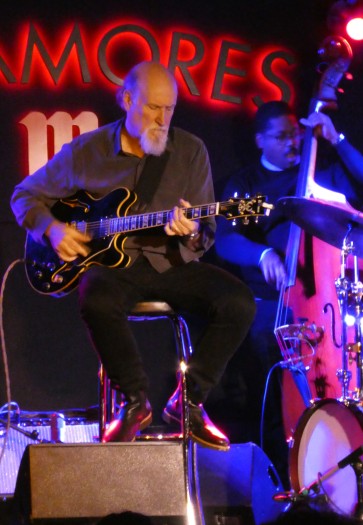 A/B Trio / Trioliloquy – this new record by the Canadian A/B Trio was just released and features next to the trio of saxophonist Dan Davis, bass player Josh McHan and drummer Thom Bennett, the wonderful trumpet master Kevin Turcotte on 5 of the 8 compositions on Trioliloquy.  This is a wonderful swinging, grooving jazz record with some incredible ensemble play and individual contributions. The musicians move in free spaces to then get together on the theme they earlier improvised on, only to take the conversation further into the essence of their music. Outstanding tracks for me are ‘Roundabout’, ‘Trioliloquy’ and ‘Bluesaholic’. Inspiring in its variety and overall quality and a real joy listening to!!