Pepe Rivero is an excellent pianist, no question and I have seen him before with his own bands and lately with Pablo Martin – he is a Cuban musician who lives in Madrid, but has a long history of great associations from Celia Cruz and Paquito D’Rivera to Omara Portuondo. His new project and album is a Homage to Monk, delivered with the quintet as advertised above for the gig at Bogui’s and with his own Big Band – the album has a disc for each formation and where the Big Band is mainly performing Monk’s music, the quintet first of all plays the Homage through compositions by Pepe, most notably the Suite Family, a four movement suite of amazing and powerful music (live as well as on disc). The repertoire for the concert was actually taken from both discs and the quintet enlarged by either another sax or a trumpet to make up for the missing Big Band.

Despite the fact that all musicians played and improvised extremely well, it was Pepe shining through Monk’s and his own compositions and improvisations – in one solo he kind of went through the history of jazz, from a Ragtime feel to modern jazz piano and left the audience (including  a smiling Paquito D’Rivera) in the packed club breathless. Late in the second set he performed a duo with bass player Reinier Elizarde ‘El Negro’, which was of such a beauty and had an uplifting Cuban groove, that the audience screamed for more … Which they will get, as he told me afterwards that he is working on a full album of duets with Reinier and the repertoire will be old and partly unknown Cuban songs. Can’t wait to hear that ! Yes, Pepe Rivero is an excellent pianist and his Homage to Monk is a record (or better 2 records) worth checking out.

That’s what Pablo Martin Caminero called his quartet, with whom he performed on August 3rd in Madrid’s Bogui Jazz club. He got the offer to play there, but his normal flamenco/jazz band wasn’t available .. so what to do? “I went on lastminute-band.com” he said with a cheeky smile …. which meant he called a few friends, with whom he hadn’t played for a while and never in this set-up before and went with them through the music and the got an stage … and played !!! Pepe Rivero is a great pianist in his own right, who just has released a fantastic double CD ‘Homage to Monk’, and he showed all his amazing skills in some extraordinary soli; trumpet player Enriquito normally plays flamenco and not jazz, but he proved a imaginative force and an interesting improviser and drummer Daniel Garcia held the rhythm and played some exciting soli as well. Pablo called the shots – he opened the evening with a bass solo based on a piece by Bach (which gave away his classical training) and after some standards they started to play his compositions – an exciting mixture of jazz and flamenco, done in the most normal way, as only someone who lives in both worlds can do it. Hi splaying is immaculate and he has a very beautiful sound on the bass, swings, cries like a flamenco guitar sometimes and improvises the most captivating soli … 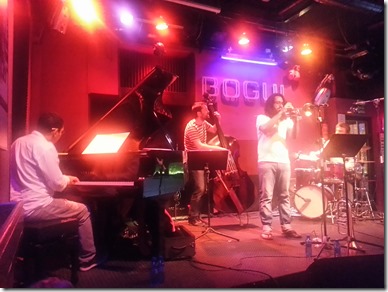 Pablo has started working on his new album – with his usual group of musicians and hopefully the new record will be done soon, because if it is as good as the previous one ‘El Caminero’ I want to hear it soon ….. To give you an idea of what his music is all about, check out  below video, which is a track dedicated to Dave Holland and is from the album mentioned before: