Over the last weeks I saw two very different pianists – a young one, still developing and showing great promise and a more experienced and settled one. Let’s start with the young one: Guy Mintus, whom I had meet at the Montreux Academy earlier this year, as he had been in the piano competition final there the year before – a young man of immense talent, who performed a self-booked gig in Madrid and presented some of his own compositions and some standards, solo on the piano, just using the occasional loop to add some clapping or vocal bits to the piano improvisations. His own pieces are full of beautiful little melodies and surprising changes and allow the listener to fall into the music easily – his improvisations on known themes like All Of You are full of ideas and understanding and are going to the essence of the song. He did start occasionally to sing as well, something he is experimenting with since a few months, but for me isn’t half as good as his piano playing – which I believe, with the right focus, will make him a musician to watch out in the future.

Luciano Supervielle is an accomplished pianist, keyboarder, who has performed with Jorge Drexler and is a prominent member of Bajofondo (formerly known as Bajofondo Tango Club) and he as well performed solo in Madrid  a few days ago … piano, keyboards, samples, beats and turntables were at his disposal to create partly solo pieces that could be modern classical music – with beautiful melodies and simplicity and partly grooving modern  tracks with cool beats and tasteful selected samples and piano work – even including the powerful Perfume, from the first Bajofondo Tango Club album – a great version that got the audience going!!!The show was truly amazing – his use of all the tools he had always enhanced the song, which was performed perfectly on the great sounding piano in the Café Berlin. Luciano is slowly stepping out of the shadow of Bajofondo and building himself a reputation as a composer and performer.

Some new CDs I am listening to at the moment:  I just love what Belgian pianist Jef Neve is doing and his new album Spirit Control is no exception – this time he is using strings and horns to enhance his compositions and is creating hauntingly beautiful and captivating music that defies categories. Freefall is a touching piano/vocal duo recording by singer Anna Lauvergnac and her music partner of many years Claus Raible. Spontaneous captured in the studio, these songs are all about musical communication, understanding and challenging each other within the songs, getting the best out of each musician that way and at the same time bring the standards of these recordings to life. Definitely worth to check out.

Then I am listening as well to  some older CDs – kind of hearing back stuff I like and haven’t heard for a while … Julius Hemphill’s The Hard Blues from his album Reflections … so much power, so much energy and deep musical expressions. That track is just incredible. And as well the Nobuyoshi Ino & Lester Bowie album DUET with the masterful bass/trumpet version of Sting’s Moon Over Bourbon Street – a track I revisit frequently for many years.. and the rest of the album is pretty cool as well.

This year’s event in Bremen was the 12th edition of jazzahead and had the most exhibitors and visitors and, as always, it was good to see old and new friends, having meetings and chats about the state of the jazz business and discuss promising talent and exciting new releases. Jazz industry people from all over the world came to Bremen this year and made it a truly global event. But the showcases were, as every year, the main draw and some of them this time were simply spectacular. After long day of meetings and chats I needed some music and decided to check out Eli Degibri, whom I had met during our panel in New York at Jazz Connect – his quartet of himself on saxes, Tom Oren on Piano, Tamir Shmerling on bass and Eviatar Slivinik on drums ran through some originals showcasing the incredible technique Degibri has. Wonderful his sound on the soprano and powerful his soli on this instrument. Glad I had a chance to check him out. 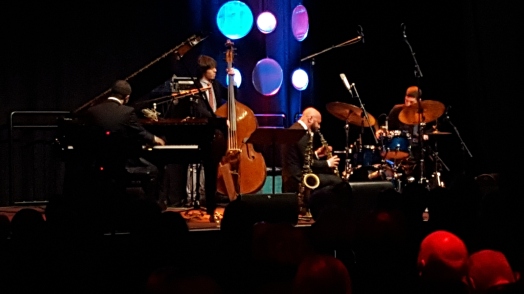 After some very interesting dinner conversations at the Karsten Jahnke / Enjoy Jazz dinner on Friday, I had to hear the new project by Marilyn Mazur SHAMANIA. I always liked her compositions and her performance and recordings, since the time I saw her first with Miles Davis. Her 40 minute late night set was pure power – 2 percussionists, drums, piano, bass, vocals and horns make up that all female ensemble – great grooves, really good soli by all musicians and fantastic interplay. It got rhythm and space to improvise, nice little melodies and amazing energy. I just loved it – if anyone wants to check this gig out, go to http://concert.arte.tv/de/marilynmazur-shamania-jazzahead-2017 .

Saturday was less meetings and more music, starting with German pianist Lorenz Kellhuber, whom I had met at the first Montreux Academy and always wanted to see him live – 30 minutes is never enough if the show is good and his was – a great and inspired trio performance of originals and extended improvisations. A very talented young man indeed, perfectly supported by Arne Huber on bass and Gabriel Hahn on drums.

Next up was Gilad Hekselman, a young guitar player who is making waves in the jazz scene and rightly so – his melodic compositions are timeless and beautiful and his playing ranks with the top on his instrument. The trio with Rick Rosato on bass and Jonathan Pinson on drums is tight and shows great understanding and communication. I am sure this is one musician we will hear a lot from in the coming years. 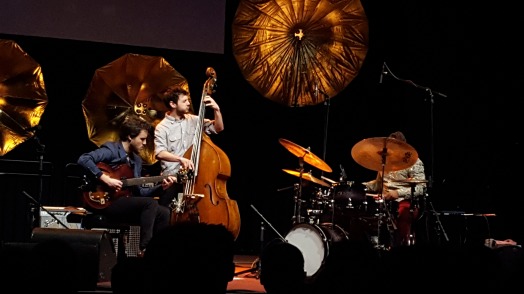 Camilla Meza I had heard in New York about 2 years ago – a recommendation by a Spanish friend of mine and I did enjoy her show then, but she really has developed amazingly and her set in Bremen was interestingly diverse with great guitar work by her and some astonishing vocals. Her music is reflecting the two cultures she lives in: her Chilean roots and her New York influence. Effortless she moves between these worlds, sometime expressing them together, sometimes keeping them apart. Her guitar playing is very good and reminds me a bit of George Benson the way she sings along to her soli. Her version of ‘Cucurrucucu Paloma’ was unique and very touching – someone to watch for the future.

I saved the best for last – the Julian Lage Trio, with Julian on guitar, Jorge Roeder on bass and Eric Doob on drums played a perfect and incredible 40 minute set of Julian’s music from his recent release Arclight and from a forthcoming album, to be released in the fall. Julian is growing musically every year and now is one of the most important young musicians in jazz. His compositions are stylish and accessible, even so the trio’s improvisations leave space to wander and let go. His sound is beautiful and clear and his playing doesn’t leave you asking for more. Not even 30 years old yet and he has become the one guitar player everyone is talking about and he deserves it: he is at home in any musical environment, whether it is duos with Bill Frisell or Nels Cline, the trio format or guesting in Eric Harland’s group. Some of the new songs have a slight Americana feel or influence to them, but overall sound really good, which makes me curious about the new album. Can’t wait to see a full gig in July, when he will be back in Europe and listen to the new album later this year. 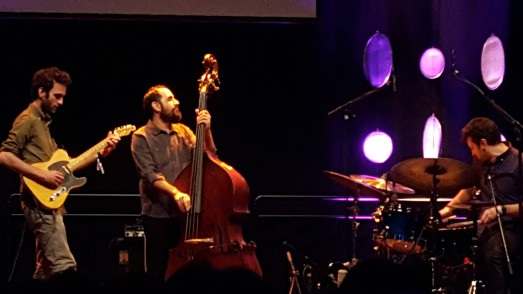 Jazzahead 2017 – for three days Bremen became the jazz centre of the world and showed that, even so the jazz record business is having a tough time, the music is alive and kicking!

For the curious ones: if you want to check out any of the above mentioned shows, just go to https://www.youtube.com/results?search_query=jazzahead%21+2017