I have written about Madeleine Peyroux many times, as I am a fan of her singing, phrasing and the trio format she lately performs in. This summer open air show was based on her latest release Secular Hymns, as was the last gig I saw of her in the Teatro Fernan Gomez last November. The trio with her on acoustic guitar, Jon Herington on electric guitar and Barak Mori on bass, is even more tight and together and seemed to thoroughly enjoy the concert, as did the audience, despite temperatures of more than 30 degrees Celsius at 9 pm. Beside the songs from Secular Hymns, the trio performed most of her best known covers – as usual paying a tribute to Leonard Cohen, making Randy Newman’s Guilty all her own and entertaining the audience with a song that is a pretended call to Donald Trump … They are tasteful in ballads, swinging when need to and maintain an overall high musical standard and Madeleine’s singing is still full of melodic invention. A great show, nothing less! 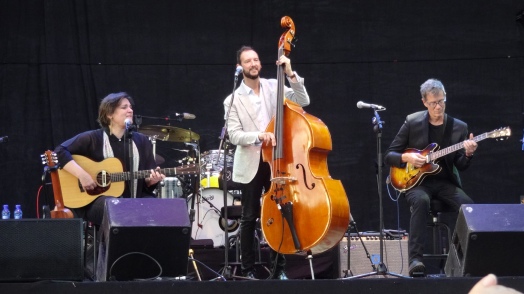 Madeleine was followed on the stage by singer Jose James and his band, featuring James Francies on piano and keyboards, Nate Smith on drums and Josh Hari on bass. I hadn’t seen Jose in a while and it was good to hook up a bit before the show and then he went on and it was pretty cool: strong songs with heavy grooves, plus a few ballads of sheer beauty – this was more the R&B leaning James than the jazzy guy, but nevertheless, this stuff is funky and has its roots in jazz in any case. A great band with an outstanding singer .. in his gorgeous version of Lean On Me he sang immaculate and James Francies played a solo on the e-piano that was reminiscent of Les McCann, but still modern and all his own. There is not much more to say about the qualities of drummer Nate Smith that hasn’t be said and written in other places – he is just a driving force in this music and Josh Hari was the solid anchor they all needed. Jose James favourites like Trouble sounded fresh and powerful and everyone left with a smile after his final encore of Ain’t No Sunshine …. He’s got it all!!

John Scofield’s Uberjam is one of my favourite of his various projects – having been started in 2002 with their first release, simply called Uberjam, then featuring Avi Bortnick on guitar, Jesse Murphy on bass and Adam Deitch on drums. The record was a surprise as this funky and groovy outfit used samples and electronic on record and stage – something Sco hadn’t really done before to that extent. That first version of the band toured in Europe and I was lucky enough to see them perform – so powerful and full of rhythmic ideas and wild grooves. In 2013 followed Uberjam Deux and Andy Hess replaced Jesse and Louis Cato drummed on some songs and was the drummer on the tour as well – I saw them in Berlin at the jazz festival then and loved every minute of it and now they came to Madrid and this time the drummer was Dennis Chambers! The repertoire was taken from both albums and they gave each song a lot of space to improvise and Bortnick and especially Scofield made the best use of that space with some incredible soli – sitting on top of some astonishing grooves by Chambers and Hess. This funk based, electronically enhanced groove band gives one of the best shows around at the moment – go and move your legs and listen – amazing! 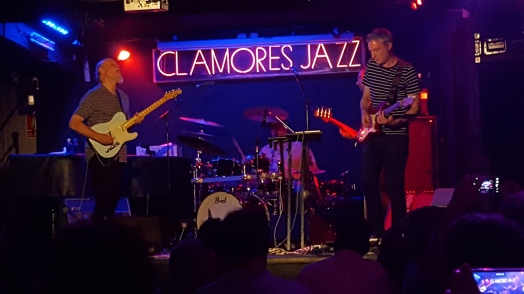 Once a year the Teatro Real becomes part of a little festival organised by Universal Music, where they present some of the their  top local and international acts in the 1400 seating venue – this year including among others Sting, Zucchero and Michel Camilo and Tomatito. This venue seemed to be the perfect place for them in terms of ambience and sound and style … I have seen the two perform in many different venues, but none of them felt so right for this duo than the Teatro Real. Playing material from all three releases in their Spain Trilogy (Spain, Spain Again, Spain Forever) it was clear right from the start that they had grown even closer musically, to the point that sometime one could only hear one sound – piano and guitar melted into one by being played perfectly together. From Libertango to Charlie Haden’s Our Spanish Love Song, via Eric Satie to Chick Corea or some originals, everything sounded as if composed for this duo. The best of the many shows I have seen by them and a deserved standing ovation after two encores. One of the best gigs of the year so far.

Theo Croker at the Bogui Jazz Club in Madrid: two nights of straight, but modern jazz – old standards played for an audience of our times, by a group of talented young musicians, who understand that there is no today without yesterday and that you can only move the music we call Jazz forward, if you know what happened before you. Young rising trumpet star Theo Croker made his name touring for over a year with Dee Dee Bridgewater as her musical director and arranger and then took his own group out to tour his two OKeh albums in the last years. On a break between gigs with his own band, he took the opportunity to perform a few dates in Spain with his friend and pianist Juan Sebastian Vazquez and his trio, featuring bassist Francisco Manuel Lopez and drummer Daniel Garcia Bruno.

The Trio started of each of the two sets we saw on July 8th with music from its latest release ‘tribute’, a session worth checking out for composition and performance. After these strong introductions into each set, Theo came on and they played some Miles, Gershwin, Shorter and the title track of the Juan Sebastian Trio album, as well as the Croker composition Meditations, from his Escape Velocity album – all performed to the highest standards, especially from Croker and Vazquez, who showed inspired and melodic improvisation skills. Played acoustic, the Croker tune, on the album in a more modern sound bed, showed what a great composition it is and held its place beside the other great standards the group performed. Celia Krill, a local jazz singer, joined the band for two beautiful songs, one of them you can hear as well on the Trio album by Juan Sebastian.

The musicians had a lot of fun and Theo obviously enjoyed playing the standards, something he isn’t doing very often, as he usually tours with his own band and their brew of modern and hip jazz, which I can only recommend if anyone get the chance to hear them. Theo Croker is surely an artist for today, having his roots in the music’s past and leading jazz into the future.

Summer in Europe – Jazz Festival and main touring season for artists from all around the world – bringing a bunch of great bands to Madrid as well – lots to check out in the coming weeks … first was Lee Ritenour with Dave Grusin and Tom Kennedy on bass and Wesley Ritenour on drums – a rare club concert of two music legends and a master class in elegant guitar playing. And elegant is the right word for Ritenours style of playing – even when he rocks (and did he rock sometimes that night!) it is with style … and a smile on his face, watching his son and Kennedy pushing him into further explosive soli. Keyboarder Grusin is the perfect partner for Ritenour, but as well a great pianist in his own right, which his incredible solo performance over one of his film themes showed – a packed Clamores club as silent as it can be, only to jump at the end into roaring applause. Ritenour is the rare beast of a musician who is at home in all possible styles .. from smooth to swinging jazz, into rock and a touch of Brasil – it all makes sense and comes natural … and elegant! After not having seen Lee for a while it was great to hear Captain Fingers again and catch up a bit between the two shows, one of which had a short live broadcast on local TV station Tele Madrid!! 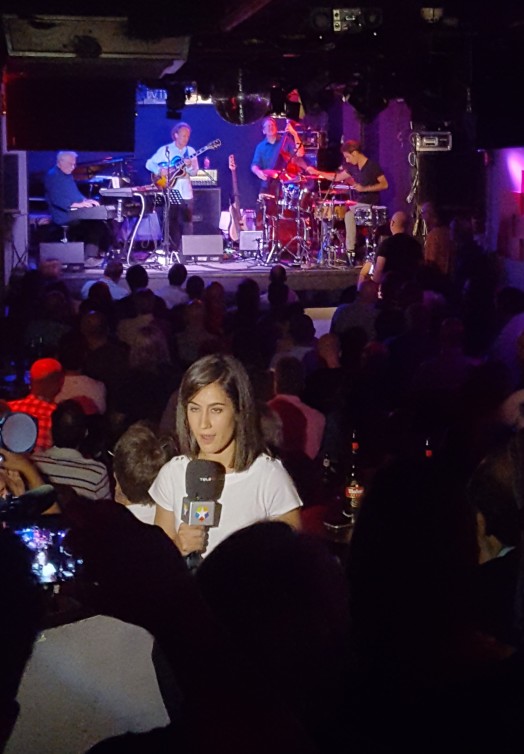 The day after Lee, on July 4th, young American guitar player Julian Lage stopped by in the same club and had a sold out show. This time he showcased a new trio, featuring Chris Lightcap on bass and Eric Doob on drums – both great musicians and fitting sidemen for this extremely talented young artist. Personally I think Lage is the best of his generation – he can simply do anything and can add something personal and individual to everything he does – he has an amazing technique, but what he does with it, that makes him special: his flow of ideas is surprising and never ending and his expression one of joy and deep-felt emotions, expressed in a groovy melodic way. The repertoire for this show came from his latest album Arclight and some new compositions, which will be on his next recording, due to be released in February next year. After 2 hours of playing he went to sign some CDs and shared some time with his many fans – a lot of them surely guitar players … the instruments on their backs giving that away! Julian is the outstanding young guitar player for me: for now and tomorrow.

Meanwhile everyone in the jazz world will have heard about or read about the group HUDSON – the new jazz super group featuring Jack de Johnette, Larry Grenadier, John Medeski and John Scofield. Usually I am not a fan of superlatives in advance of any music being heard, but here it is actually true – the album HUDSON is an instant classic and has tons of great moments to offer to the listener. This is musicianship on the highest level and I surely hope to get a chance to see these guys live one day, but the record is already amazing – whether it is own compositions or covers – this is just incredible and each musician is showing again and again why they belong to the best on their respective instruments. A beautiful sequenced record with a finale that reminds me a bit of Jim Pepper’s music – powerful and emotional American Indian influences in a song of sheer beauty. My top album of the year so far … and one that will be difficult to beat!